Claustrophobia is part of a wide array of phobias.

It is a mental disorder that totally harms the lives of those who suffer from it. We spend most of our lives in closed spaces: at work, at home, when studying, during our leisure activities, etc. Therefore, a person who feels an existential fear of being in closed spaces might have a very serious problem and is unable to conduct a proper and normative life. Fear of airplanes and flights, of a small room, of sitting next to a window when it is closed, of being in an office or a toilet- these are all categories of Claustrophobia.

What is Claustrophobia exactly? Can the disorder be treated without having to take medications or needing medical equipment?

Claustrophobia is a mental disorder, belonging to the category of phobias. In general, it is a fear of being inside closed spaces of various kinds, such as fear of flights, of sitting in a classroom, riding a train or a vehicle, being in a shelter, a tunnel, a stairway, an elevator, and even a fear of sitting between two people, etc.

The fear of being inside a closed space is so varied since throughout our lives we stay inside such places on a daily basis. A person who suffers from Claustrophobia is frightened of being in a closed space that he or she may not be able to exit, and as a result, might suffocate and die. This explains the deep-seated fear and existential anxiety of this person. Such anxiety greatly limits the life of the person suffering from it, and in many cases, this person may feel miserable and helpless due to the avoidance of closed spaces which he or she considers dangerous. It is important to know that a person’s presence in a closed space, or when one thinks about such a situation and fears it, arouse the same fear that might quickly develop into an anxiety attack. 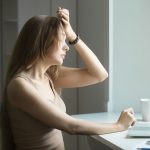 Claustrophobia can have many causes. Following are the main ones:

There are three kinds of symptoms that are characteristic of Claustrophobia:

Call the call center 24/7 717-436-3745 Send a message with an immediate response Send an email office@oragolan.com