The thing you have not yet done to find a relationship

The thing you have not yet done to find a relationship

“There is no such thing as a person who is not built for a relationship or who is not attractive,” Ora replies emphatically. “Someone made sure to put in you, all of us, in mind that external attractiveness for example, is a condition for marital success and there are quite a few factors that have an interest in believing it. But attraction is a chemical thing and not a matter of external appearance, do not you know people who are not externally attractive ”

The first character that went through my mind was that of Zion Baruch. Then there were a few others whose attractiveness was not directly proportional to their abilities in the opposite sex, such as Woody Allen and Nicolas Sarkozy.

Still, even in these cases, it is not a guarantee of a successful relationship.

“The relationship we are talking about here, is what I call ‘a relationship from the upper millennium’. A relationship of trust, friendship, a safe place where you can flourish. That is what we are aiming for.” 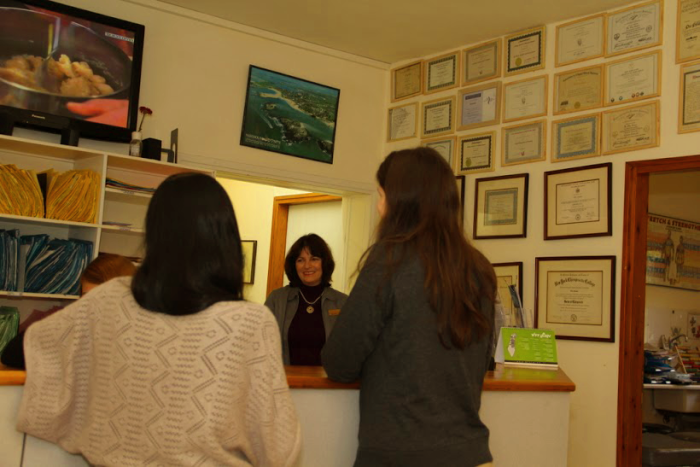 The reception room in the center of Ora Golan, a good relationship begins here

It sounds very beautiful. But this issue has preoccupied so many for so long – people crave relationships and put a lot of effort into it, yet it does not always work. What are they not doing right?

“First of all, mistakes that are so common among the patients I meet are avoided. Especially assumptions that have a list of issues that prevent us from having a relationship such as: appearance (especially overweight or a problem that concerns quite a few men – height). Neither money nor status, garlic None of these and other things dictate the ability to find a relationship. ”

So what is it?

“If something is blocked, it dictates the inability to find the relationship. Once an emotional barrier is neutralized, new options open up.”

It sounds too vague to me.

“If you have an emotional block, you will find yourself repeatedly on the same path and you will meet the same types of people over and over again. Neutralizing an emotional block will bring you to meet people you have never been aware of before. “I can see them, but only a very small part.”

Give me examples. How is it expressed?

“I come across people who invest energy in those who are not interested in them, but reject those who are interested in them and can have an excellent relationship with them, if only they were not blocked. There are those, especially women, who are attracted to those who harm them. “They are so suspicious that no potential spouse will pass their test – without even knowing that they themselves are examining the spouse.”

“Whoever thinks this is a lottery, why should he even invest in looking for a relationship?”

You said you also care about an existing relationship.

In that case must come together?

“Desirable. But not necessarily, everyone goes their own way independently.”

For what reasons do people who are already in a relationship come to you?

“Because of communication difficulties. Sometimes in the first place the reason for the couple’s choice was incorrect for a variety of reasons. Sometimes it actually started well but the erosion of children, routine or financial situation led to the crisis. There are very crisis situations of infidelity.”

The mountains can not improve the economic situation of the couples, or take the children to a jamboree for them. How can you help with burnout?

“True. But it’s important to understand that infinite infatuation is possible if you feed it, it needs fuel. Not much, by the way. A few minutes a day is enough to fuel a relationship that will survive even in times of crisis.”

Well, that’s what every relationship counselor will say.

“True. But when there are emotional barriers, these recommendations are empty because they are not feasible at all. I do not give couples advice on which room to go to. When the treatment is successful these things happen by themselves, the treatment allows to decide and most importantly: to perform. Against the background of burnout or betrayal. ”

If so, neutralizing emotional barriers can lead us to find a relationship, maintain a relationship or separate if necessary. But does it work for everyone?

“No. We have very detailed feedback from patients and we deduce statistics from them to check ourselves all the way. There are about 15% who do not respond to treatment. The rest report improvement or do not remember at all why they came, because the problem solved is perceived as far from them. We need To pull out the questionnaire they filled out at the beginning of the first meeting to remind them that not long ago they suffered greatly from something. ”

Are there really some who do not remember why they came?

“There are, and they are very many.”